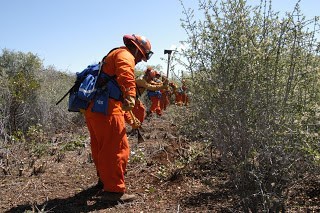 “For 61 years, California inmates have been given the chance to be heroes by risking their lives to fight wildfires while taking advantage of positive rehabilitative programs,” said CDCR Secretary James Tilton. “The Conservation Camp Program plays an integral role in California’s statewide wildfire response. These inmate firefighters and the staff from CDCR and CAL FIRE should be commended for the hard work they do to minimize the loss of life and property.”

Established in 1946, the Conservation Camp Program provides California with an able-bodied, well-trained, and well-equipped workforce for fire suppression and other emergencies. There are 42 adult and two Division of Juvenile Justice (DJJ) conservation camps statewide. CDCR jointly manages 37 adult and juvenile camps with CAL FIRE. Five adult camps in Southern California are jointly managed with the Los Angeles County Fire Department.

“The cooperative nature of our partnership makes this a successful program at all levels,” said CAL FIRE Director Ruben Grijalva. “The crews perform a vital public service that benefits Californians as well as state, federal, county and local government agencies.”

More than 4,400 offenders are in the program. Approximately 200 crews log an average of more than three million person hours a year fighting wildfires and responding to floods, earthquakes, and search and rescue missions.

When not responding to emergencies, crews put in an additional seven million hours every year working on conservation projects on public lands and community service projects. Fire crews clean up campgrounds, beaches and parks on city, county and state land and provide the labor for weed abatement and other projects that help reduce the risk of fires and other disasters.

Inmates and CDCR fire camp staff also benefit communities when they are not fighting fires by participating in presentations to schools and juvenile group homes to encourage kids to avoid drugs and alcohol. Many camps raise funds to help feed the hungry and support local non-profit organizations.

Inmates assigned to the camp program are carefully screened and medically cleared for participation. Screened adult inmates are serving sentences of less than two years and spend an average of eight months in the camp program. Inmates must be physically fit, and are evaluated on their emotional and intellectual aptitudes and criminal history. Those convicted of kidnapping, arson, or sex offenses are excluded from the program.

After being selected for camp, inmates go through two weeks of physical fitness training followed by an additional two weeks of training in fire safety and suppression techniques. During their training, they are constantly evaluated for their overall suitability to continue in the program. Those who do not pass the evaluation are sent back to a state prison.

Juvenile offenders earn their way into camp placement. Wards must be medically fit, have between four and 36 months left to serve, must be free of major rule infractions, and have no history of escape with force or violence. Wards convicted of sex offenses or arson are excluded.

“The Conservation Camp Program provides many benefits to the State and to the inmates who accept the responsibility of fire camp placement,” said Associate Director Anthony Kane, who oversees the camp program for CDCR. “California and its citizens benefit by having a fully trained workforce able to respond immediately to wildfires statewide. Inmates benefit by learning a solid work ethic, values, teamwork, discipline and skills that put them on a road to a better future, reducing the chance of them returning to prison after their release.”

The program is estimated to save the State more than $80 million annually that otherwise would be paid to accomplish the same tasks. It is also less expensive to house offenders in conservation camps instead of State correctional facilities.