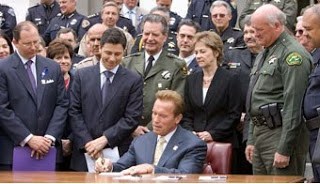 “This is a major step forward, but now the real work begins. With this bill, we will add 53,000 beds – the most built in a generation. But we will also put management reforms in place so that these beds are built quickly and the rehabilitation programs tied to each and every new bed are strong,” said Governor Schwarzenegger.

“I would like to congratulate the Legislature, especially its leaders, Senate President Pro Tem Perata, Speaker Núñez, Senator Ackerman and Assemblyman Villines, who put aside their political differences and never forgot the public we all serve. I would also like to thank all of the sheriffs, police chiefs, district attorneys, probation chiefs, county officials and everyone else who worked so hard to help us get here. They all share my commitment to public safety and know that this legislation will make our streets safer.”

Assembly Bill 900, also known as the Public Safety and Offender Rehabilitation Services Act of 2007, will provide $7.7 billion to add 53,000 prison and jail beds in two phases and fundamentally shift how the California Department of Corrections and Rehabilitation (CDCR) approaches rehabilitation for California’s prisoners. The legislation will also help move more than 16,000 prisoners out of “bad beds” located in prison libraries, gymnasiums and day rooms, freeing up these spaces for rehabilitation programs.

“No longer will we build giant warehouses in remote locations that produce criminals who are more dangerous the day they are released than on the day they came in. We are finally facing up to the fact that most California inmates are someday eligible for parole and that we must do everything we can to make sure those who are released don’t commit new crimes,” said Governor Schwarzenegger.

Assembly Bill 900 funds 16,000 beds in Secure Re-Entry Facilities, small and secure centers that provide offenders with job training, mental health and substance abuse counseling, housing placement, and other programs in the critical few months just prior to their release.

To speed up construction and overhaul rehabilitation programs, the Governor will direct his Administration to establish strike teams within CDCR’s management.

“And we will act quickly to use the other remedies in this legislation, such as the statutory authority to move inmates out of state whether they volunteer or not as another way to reduce overcrowding. My administration also intends to make smarter and more effective use of existing parole policies, beef up probation services and reform juvenile justice,” continued the Governor.

Governor Schwarzenegger is committed to continue aggressively pursuing many aspects of his prison reforms he introduced in January, including funding for probation services; moving non-serious/non-violent juvenile offenders to local facilities; and transferring 4,500 low-risk female offenders into local facilities.

Details of the Public Safety and Offender Rehabilitation Services Act of 2007 include:

Rehabilitation and Secure Re-Entry Beds: 16,000. The agreement prioritizes rehabilitation and reducing recidivism. It directs CDCR to set aside 4,000 beds for drug treatment and create 16,000 new beds in secure re-entry facilities.

“Infill” Beds: 16,000. The agreement adds 16,000 beds at existing prisons to reduce the number of prisoners in bad beds. Currently state prisons currently house approximately 172,000 prisoners in facilities designed for about half that number.

Medical Beds: 8,000. The agreement adds 8,000 medical, dental and mental health facility beds as mandated by the federal Receiver The Receiver will determine where these beds will be added, and what services (mental health, long-term care, other) they will provide.

Local Jail Beds: 13,000. The agreement provides $1.2 billion to increase the number of beds in local county jails by approximately 13,000 to remediate overcrowding faced by counties across the state. Counties are required to match 25% of the $1.2 billion (approximately $300 million), unless their population is less than 200,000—in these counties, the CSA can reduce or eliminate the match. Counties that assist the state in locating re-entry facilities and helping parolees get mental health services will receive funding preference. In 2005 alone, 233,388 individuals avoided incarceration or were released early from jail sentences due solely to a lack of jail space.

Phase I Benchmarks: CDCR has committed to meeting specific benchmarks during Phase I to trigger Phase II funding. They are: