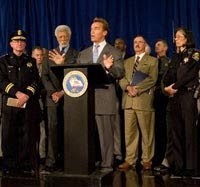 Governor Schwarzenegger today proposed an anti-gang initiative to fight gang violence in California. The California Gang Reduction, Intervention and Prevention Program (CalGRIP) will target more than $48 million in state and federal funding toward local anti-gang efforts, including job training, education and intervention programs, and will give law enforcement the tools to closely track gang leaders both inside state prisons and when they are released on parole. CalGRIP combines funding from different programs and directs them toward intervention, suppression and prevention. The Governor is also appointing a statewide gang coordinator, to coordinate all state programs and funding for anti-gang activities with local and federal agencies.

“A growing number of Californians are living a nightmare trapped inside their homes, afraid to come out unless they absolutely have to. That’s because in many of our cities, whole neighborhoods are terrorized and intimidated by street gangs. Kids are scared to go to school and parents are terrified for their safety,” said Governor Schwarzenegger. “So today I am announcing a coordinated, multi-faceted, anti-gang initiative that focuses on the three strategies everyone agrees work best: suppression, intervention and prevention.”

For the past several months the Governor has met with mayors, law enforcement, faith-based and community organizations, local officials and legislators to discuss how communities across the state are fighting gangs and what resources they need to strengthen their success. At every meeting the Governor heard about the same problems: lack of coordination between state and local agencies and programs, lack of funding, and lack of a comprehensive approach to anti-gang efforts. “Everywhere I went, local law enforcement would say the problem is just being pushed from one city to the next. They say gang leaders come out of state prisons and go right back to terrorizing their communities – law enforcement finds out they have gang leaders back in their communities when gang-related violence spikes. Prosecutors say they need more tools to protect witnesses. Community leaders say they can get kids out of gangs but they need help with job training and education. The State spends hundreds and hundreds of millions of dollars on education, job training and substance abuse treatment every year – with no focused coordination on gang activities. We need a comprehensive approach to gang violence that provides a statewide framework with long-term solutions,” Governor Schwarzenegger said.

Details of the initiative include:

The California Department of Corrections and Rehabilitation (CDCR) and an advisory committee of gang experts will establish a new parolee designation in California: “High Risk Gang Offender.” Like sex offenders, high risk gang parolees will be subject to special parole conditions that limit their ability to recruit children into gangs and limit their access to gang-infested areas. Offenders convicted of gang-related offenses will be evaluated for HRGO status prior to release. Local law enforcement will be notified before High Risk Gang Offenders are released into their neighborhood in the same manner they receive notice of high risk sex offenders.