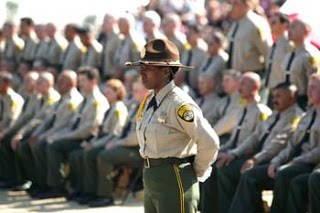 GALT – The California Department of Corrections and Rehabilitation (CDCR) today graduated this year’s largest class of correctional officers at the R. A. McGee Correctional Training Academy in Galt. The correctional officer training is part of Governor Arnold Schwarzenegger’s commitment to increase public safety in the State’s prison system.

CDCR Operations Undersecretary Bud Prunty expressed his appreciation to the cadets, “I commend you on your dedication to serve the people of California by working in our prison system. You are among a select few who have successfully passed the rigorous testing to reach this level. Your work is important to the prison reforms being implemented by Governor Arnold Schwarzenegger.”

The 388 graduates of the program have already been assigned to specific adult correctional institutions where they will begin their careers as correctional officers. Cadets receive 640 hours of instruction at the academy, including classes in leadership and ethics, crime scene investigation, inmate supervision, emergency operations, first aid, and physical fitness training. Upon graduation from the academy, new Correctional Officers earn more than $45,000 per year. Top level Correctional Officers can earn more than $73,000 per year.

The Department is making progress toward meeting its goal to select and hire correctional officers to fill every established position vacancy, including new court required positions. CDCR has intensified its recruitment efforts to increase the number of correctional officers who are needed throughout the state. CDCR receives approximately 7,500 correctional officer applications per month. Typically, only four percent of the potential candidates pass the selection process, which includes psychological, academic, background investigation, medical and physical fitness evaluations.

For pictures go to http://www.cdcr.ca.gov/Communications/largest_class.html

Sacramento Bee Article – Steve Wiegand: On the right side of the bars