The California Department of Corrections and Rehabilitation (CDCR) today transferred another 42 inmates to out of state correctional facilities in Tennessee and Mississippi, as part of its effort to reduce overcrowding and increase space for rehabilitation programs. 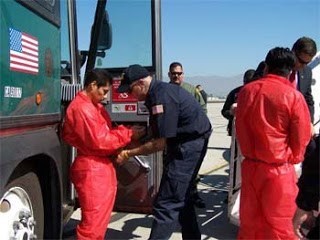 Forty of the inmates were transferred to the Tallahatchie County Detention Facility in Tutwiler, Mississippi, marking the first time that CDCR has used that facility. In addition, two inmates were sent to the West Tennessee Detention Facility, joining 78 California inmates who have been housed there since last October.

Including 316 inmates housed in the Florence (Arizona) Detention Facility, today’s transfers bring to 436 the number of California inmates housed in out of state correctional facilities, all of which are contracted with and operated by the Correctional Corporation of America (CCA), based in Nashville, Tenn.

“The temporary out of state transfer of inmates will provide immediate relief to California’s prison system,” said James Tilton, Secretary for Corrections and Rehabilitation. “Relieving overcrowding will improve the safety of our prisons both for inmates and staff while the Governor’s comprehensive reforms are fully implemented.”

The transfer of inmates out of state was begun in response to an Emergency Order issued by Governor Schwarzenegger in October 2006, but was halted in November while the state’s authority to move the inmates was challenged in lawsuits. In February 2007, Governor Schwarzenegger signed AB 900, The Public Safety and Offender Rehabilitation Act of 2007, that clarified the authority of CDCR to temporarily transfer inmates to private facilities in other states, which was resumed on June 1.

It is expected that CDCR will process up to 400 inmates per month for transfer out of state over the next two years, and that approximately 8,000 inmates will be transferred by March 2009. Transfers will continue thereafter as needed, as AB 900 authorizes transfers until July 1, 2011.