“The Governor’s comprehensive corrections reforms aim to address severe inmate overcrowding at state prisons and local jails by funding new beds tied to rehabilitation, and creating secure reentry facilities in the local communities where inmates will be returning,” said Marisela Montes, CDCR Chief Deputy Secretary, Adult Programs. “Inmates too often leave prison with $200 minus the cost of a bus ticket, and no prospects for success once they return home. The goal of a secure community reentry facility is to ease the transition of local residents and improve public safety.” 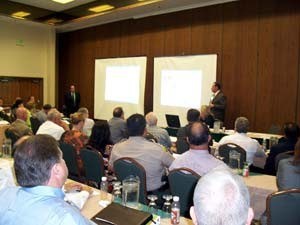 “It is very important that law enforcement officials in the Central Valley work with the state to improve success rates of our residents who are reentering the community after prison. Fresno is interested in exploring the use of secure community reentry facilities as a way to reduce recidivism and prevent our citizens from becoming victims,” said Fresno County Sheriff Margaret Mims. “We are also very interested in partnering with the state to reduce overcrowding in our local jails and prisons. It is important that our county take advantage of all the programs and funds that the state is making available.”

“By law, inmates are returned to their county of last legal residence whether they’re rehabilitated or not. Giving these returning residents the tools to be law-abiding members of the community should increase public safety and reduce crime,” said Tulare County Supervisor Connie Conway. “It’s important that elected officials and the public at large realize that the entire community benefits from having reentry programs at the local level. By partnering with the state on reentry we can help keep parolees from committing new crimes, and going back to prison.”

In May of this year, Governor Arnold Schwarzenegger signed Assembly Bill 900, the Public Safety and Offender Rehabilitation Services Act of 2007, a historic prison reform agreement. Chief among the provisions of Assembly Bill 900 are funding for 16,000 beds in secure community reentry facilities. These community-based facilities will have a maximum of 500 beds each.

Secure community reentry facilities will enable CDCR and local communities to create an unprecedented continuity of care to provide support services. Reentry facilities will be built in cities, counties or regions willing to partner with CDCR, to assist local residents who are required to be returned to the county where they committed their offense upon release.

These facilities will provide programs and services such as: intensive substance abuse treatment; vocational training and job placement; education and GED coursework; anger management classes; family counseling; housing placement; and, targeted services to help ease the transition from incarceration to a crime-free life on the outside.

This regional workshop was the fifth in a series of ten statewide regional workshops that have been organized through October, 2007. In addition, on July 16 CDCR hosted an online web seminar to discuss why community reentry facilities are important to public safety.

“These informational workshops are important to raise local awareness of the new secure community reentry facility model among stakeholders at the county level, so that we can start educating the public on this new approach toward increasing public safety,” said Fresno County Board of Supervisors Chair Bob Waterston. “Since any final proposals and agreements on secure community reentry facilities will be negotiated by county sheriffs and county administrative officers, and ultimately voted on by the board of supervisors, it is important that all interested parties are fully informed of the process and are on the same page.”

For more information on secure reentry centers, and the Governor’s focus on rehabilitation through the new reforms, please visit the CDCR website at: http://www.cdcr.ca.gov/News/PrisonReform.html