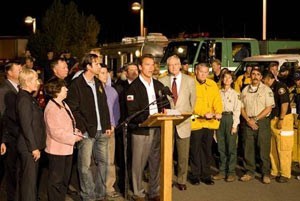 Responding to Governor Schwarzenegger’s direction for state agencies to assist the firefighting efforts in southern California, the California Department of Corrections and Rehabilitation (CDCR) is mobilizing fire department emergency strike teams from prisons throughout the state. The strike teams’ deployments are being coordinated through the Governor’s Office of Emergency Services.

“Consistent with state and federal emergency declarations, I am directing staff and fire departments at all of the state’s prisons to mobilize and direct available firefighting resources to southern California immediately,” said Governor Schwarzenegger.

In addition to the strike teams, the department has more than 2,640 trained inmate firefighters supervised by more than 170 custody staff from the Conservation Camp Program actively fighting the southern California wildfires today after being deployed by Governor Schwarzenegger.