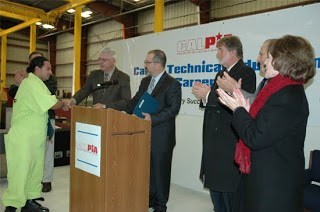 Folsom — The Prison Industry Authority (PIA) today announced that it will expand a rehabilitation program that prepares female inmates for careers as professional carpenters, supported by funds budgeted by Governor Schwarzenegger to reduce recidivism among prison inmates.

The announcement was made during ceremonies for 33 male inmates from two Sacramento area prisons who took a constructive step toward turning their lives around by graduating today from a similar training program conducted by PIA in partnership with Northern California’s Carpenter’s Union Local 46.

“These programs prepare inmates for real careers, not dead-end jobs, which can reduce the number of former inmates who return to prison,” said Charles Pattillo, general manager of the Prison Industry Authority. “Reducing recidivism saves inmate families by helping them stay together and saves taxpayer dollars by reducing the cost of a revolving door prison system.”

“The carpentry training program at Folsom has proven to be a path for success for male inmates and it has opened up a new career path for female inmates in Southern California, who up to now may have never considered working in the carpentry field,” said Pattillo. 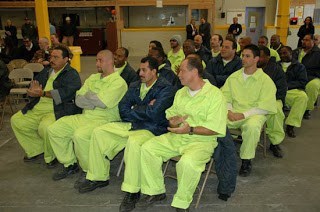 Pattillo noted that, although research data is preliminary, it concludes that inmates who graduate from PIA technical education programs have a recidivism rate that is less than one-third that of the general prison population. “Of the 70 men who have graduated from the carpenter’s pre-apprenticeship training program and been paroled, only three have returned to prison,” noted Pattillo. “If this type of success rate can be replicated it will significantly reduce prison overcrowding, and save taxpayer dollars.”
The pre-apprenticeship program, operated in partnership with the carpenter’s union, trains inmates in all of the job skills they need to work as apprentices on a construction site. Inmates, who are trained by union members, are assigned to work sites when they are paroled. PIA provides each inmate with a tool belt that includes everything they need for the first day on the job and pays their union dues for one year to provide a financial cushion as former inmates make the transition back to their communities.

Male inmates at Folsom are rebuilding a former fire camp into a conference center and classrooms on the grounds of the prison and also work in PIA’s Modular Building Enterprise, which manufacturers building for use by the California Department of Corrections and Rehabilitation and other government agencies.

The expansion of the carpenter’s training program for women, funded with $3 million in anti-recidivism monies budgeted by Governor Schwarzenegger, will complement a program already underway for female inmates at the California Institution for Women in Corona. Inmates in that program are constructing a new classroom to be used by female inmate firefighting crews housed at that prison. The expansion will take place at one of two women’s prisons in the San Joaquin Valley, to be determined in the coming weeks. 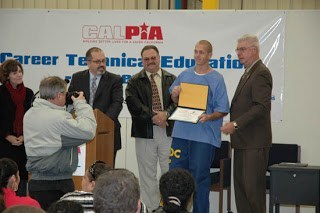 Last month, the PIA signed a Memorandum of Agreement with the International Association of Bridge, Structural, Ornamental and Reinforcing Iron Workers Union Local 118 that will establish a similar pre-apprenticeship program and prepare inmates for professional careers as ironworkers when they are paroled.
The Prison Industry Authority is a financially self-supporting state government agency that operates manufacturing and agricultural facilities within the Department of Corrections and Rehabilitation which provides rehabilitation opportunities for inmates.
Previous Post Gov. Schwarzenegger Appoints Thomas Powers Director of the Division of Addiction and Recovery Services in CDCR
Next Post Pine Grove Youth Conservation Camp Wards Return From Southern California Fires To Make Christmas Decorations For Local Communities