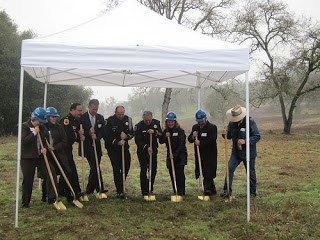 SAN ANDREAS – Officials with the California Department of Corrections and Rehabilitation (CDCR) and Calaveras County officials today conducted a groundbreaking ceremony for a major jail expansion that will quadruple the county’s jail capacity. It is the second groundbreaking this week for jail projects funded by Assembly Bill 900 (AB 900), which was signed by Governor Arnold Schwarzenegger in 2007.

“This is another step in our journey of making California safer by increasing capacity in county jails,” CSA Chair and CDCR Secretary Matthew Cate said.

Originally built in 1963, the jail in Calaveras County has 65 beds. With limited space and a court ordered population cap, the county was forced to release offenders before they completed their full sentences.

“The AB 900 funding for new jail beds will help us provide the means to hold offenders accountable and reduce future victimization,” said Calaveras County Sheriff Dennis Downum. “This project is a partnership between the state, the county, and the citizens of Calaveras County.”

The project, which will add up to 240 new jail beds, is funded by a combination of lease revenue-bonds made available by AB 900 and county bond measures. The project is expected to go out to bid in January 2011, and construction is slated to begin in the spring.

The ceremony marked the second groundbreaking this week. On Wednesday, the governor and Secretary Cate joined San Bernardino County officials in a groundbreaking for a project to increase jail capacity in that county by 1,348 beds.

AB 900, also known as the Public Safety and Offender Rehabilitation Services Act of 2007, provides $7.7 billion to add up to 53,000 prison and jail beds. The legislation provides funding for treatment and rehabilitation beds and to reduce prison overcrowding.

AB 900, through a partnership with local governments, provides $1.2 billion to add 13,000 local jail beds to reduce overcrowding in jails. Each county is required to provide a 25 percent match for its share of the $1.2 billion, unless its population is less than 200,000. Counties that assist the state in locating reentry facilities and helping parolees receive mental health services will receive funding preference. Conditional funding for 11 counties, including Calaveras, has been awarded through the Corrections Standards Authority for jail bed expansions.