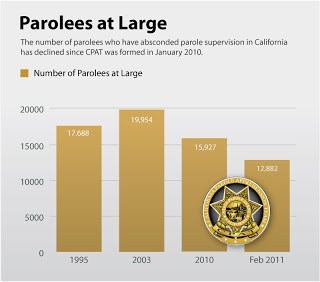 SACRAMENTO – Since the inception of the California Parole Apprehension Team, the California Department of Corrections and Rehabilitation’s (CDCR) Division of Adult Parole Operations has located and/or arrested 3,045 parolees-at-large in a little more than a year of operation.

“I’m proud of our dedicated apprehension teams, global positioning satellite specialists and parole agents who are clearly making our communities safer every day,” said CDCR’s Division of Adult Parole Operations Director Robert Ambroselli. “The number of apprehensions clearly demonstrates that law-abiding Californians are far less likely to encounter a parolee who refuses to abide by the strict rules and oversight of our supervision. For those parolees who refuse, the California Parole Apprehension Teams (CPAT) will come after them, arrest them and put them back behind bars.”

One recent effort targeting absconded and non-compliant paroles who are sex-offenders or gang-members was dubbed “Operation Safe Playgrounds.” Updated statistics show that 277 of the 407 parolees arrested state-wide during the mid-November sweep by CPAT, are still behind bars. Those parole violators are serving up to a year in state prison, with the average being five additional months behind bars. For more information on the “Operation Safe Playgrounds”, visit CDCR’s web site at www.cdcr.ca.gov and click on the Parole tab.