Back to News Releases
In this section
SAN QUENTIN – Condemned inmate Kenneth Friedman, 58, who was on California’s death row from Los Angeles County, was pronounced dead at San Quentin State Prison early Sunday morning, August 26, 2012 at 5:24 a.m.  The death is being investigated as a suicide.  Friedman was single-celled.
Friedman was sentenced to death on December 2, 2005, by a Los Angeles County jury for the Oct. 26, 1994, strangulation murder of one-time drug dealer Peter Kovach, 26, and innocent bystander Ted Gould, 29, after abducting them from a Torrance telecommunications store where they worked. Friedman had been on death row since December 14, 2005.
Since 1978 when California reinstated capital punishment, 57 condemned inmates have died from natural causes, 21 have committed suicide, 13 have been executed in California, one was executed in Missouri; and six died from other causes.  There are 728 offenders on California’s death row. 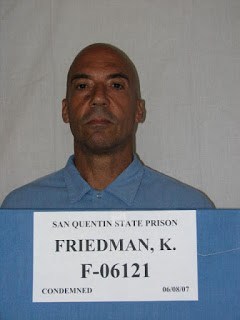