CORCORAN – Limited electrical power was restored to California State Prison-Corcoran (CSP-COR) by Friday morning after the main transformer in a PG&E substation that powers the prison exploded and caught fire late Thursday afternoon.

Back-up generators supplied power to the institution on Thursday night so that prison operations were not interrupted. The acute care hospital and the lethal electrified perimeter security fence continued to be powered by backup generators and, as a result, there were no escapes. As a precaution, CSP-COR administrators restricted movement of the 4,420 inmates housed there and this morning, the prison is on modified program which restricts some inmate movement and participation in rehabilitation programming.

At 1:45 am Friday, PG&E routed some electrical power to CSP-COR from the adjacent California Substance Abuse Treatment Facility and State Prison in Corcoran, which was unaffected by the transformer explosion and fire. Power to non-essential services at CSP-COR has been shut off, but inmates are being provided hot meals, there is power to waste water operations and all back-up generators are running to power all emergency circuits.

CDCR officials noted that the electrical problems will not interfere with visiting scheduled this weekend at both prisons.

Plant operations staff from both prisons and crews from PG&E are continuing to determine the cause of the explosion and assess the damage to the substation as they plan both short- and long-term repairs. 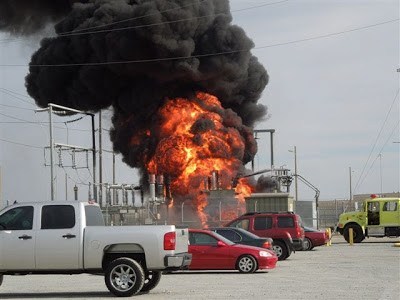