SAN QUENTIN – Condemned inmate Timothy Russell, 53, who was on California’s death row from Riverside County, was found unresponsive in his cell late Friday evening in San Quentin State Prison.  Subsequently, he was pronounced dead at the prison at 12:48 a.m., on October 5, 2013. The death is being investigated as a suicide.  Russell was single-celled.

Russell was sentenced to death on January 8, 1999, by a Riverside County jury for the January 5, 1997, ambush slaying of Riverside County Sheriff’s Deputies, James Lehmann Jr., 41, of Apple Valley, and Michael Haugen, 33, of San Jacinto, outside Russell’s residence in a remote desert area of Whitewater, an unincorporated area of the county.  Russell had been on death row since January 14, 1999. 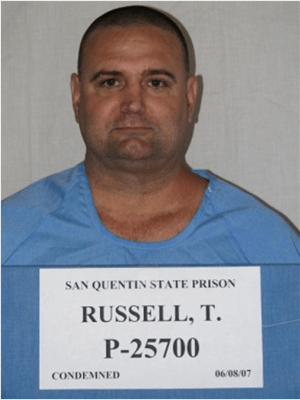