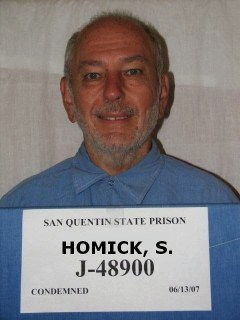 SAN QUENTIN – Condemned inmate Steven Michael Homick, 74, from Los Angeles County, was pronounced dead today, November 5, 2014. He died of natural causes at a nearby hospital at 11:26 a.m.
Homick was sentenced to death on January 13, 1995, by a Los Angeles County jury for the September 25, 1985, murder-for-hire murders of Gerald Woodman, 67, and Vera Woodman, 63, in an underground garage at their Brentwood condominium after a family gathering celebrating the end of Yom Kippur. This case was referred to by the press as the “ninja murders” and the “Yom Kippur murders.” Homick had been on death row since January 25, 1995. He was single-celled.
Since 1978 when California reinstated capital punishment, 65 condemned inmates have died from natural causes, 23 have committed suicide, 13 have been executed in California, one was executed in Missouri and six have died from other causes. There are 749 people on California’s death row.
Previous Post CDCR Checks on 1,294 Sex-Offenders during Operation Boo
Next Post Twenty Juvenile Offenders Receive High School Diplomas