Back to News Releases
In this section
SAN QUENTIN – Inmate J.C.X. Simon, 69, was found unresponsive in his cell late Thursday night. He was pronounced dead at the prison at 11:59 p.m. March 12, 2015. The cause of death is unknown pending the results of an autopsy. Simon was single-celled. 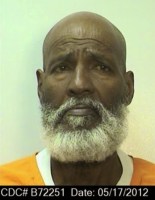 Simon, also widely known as one of the “Zebra Killers,” was received by the California Department of Corrections and Rehabilitation (CDCR) on March 30, 1976, to serve a life sentence with the possibility of parole. He was convicted in San Francisco County of two counts of first-degree murder, conspiracy to commit first-degree murder and assault with a deadly weapon.
Simon was convicted along with three other men following a string of killings that took place in San Francisco from October 1973 to April 1974. All were sentenced to life with the possibility of parole. Larry Green, 63, is incarcerated at California State Prison-Solano (Vacaville); Manuel Moore, 70, is at Ironwood State Prison (Blythe); and Jessie Lee Cooks, 70, is at Richard J. Donovan Correctional Facility (San Diego).
For information contact Lt. Sam Robinson at (415) 455-5008.
Previous Post Female Inmate Walks Away from El Monte Residential Treatment Facility
Next Post CDCR and California Community Colleges Partner to Expand College Opportunities to Inmates