Back to News Releases
In this section
SAN QUENTIN – Condemned inmate Richard James Poynton, 64, who was on California’s death row from Los Angeles County, was found unresponsive in his cell at San Quentin State Prison Thursday, April 30, 2015. He was pronounced dead at the prison at 6:50 a.m. The cause of death is unknown pending the results of an autopsy. Poynton was single-celled. 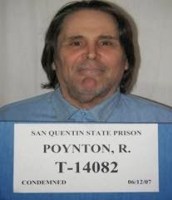 Poynton was sentenced to death on April 9, 2001, by a Los Angeles County jury for the Jan. 15, 1999, murder of his estranged wife of 18 years, Maria Poynton. A month after Maria obtained a restraining order to remove Poynton from the home, he ran her vehicle off the road and approached her, hitting her twice over the head and stabbing her 12 times. Poynton had been on death row since April 18, 2001.

Since 1978 when California reinstated capital punishment, 66 condemned inmates have died from natural causes, 24 have committed suicide, 13 have been executed in California, one was executed in Missouri, seven have died from other causes and three inmates’ causes of death are pending. There are 752 people on California’s death row.