SUSANVILLE—Officials at High Desert State Prison (HDSP) are investigating an incident that occurred on Monday, August 31 in which two inmates attacked and killed another inmate.

The incident occurred just after 1:30 p.m. on one of the prison’s maximum-security yards when two inmates attacked the victim with an inmate-manufactured weapon. Officers quickly intervened using chemical agents to quell the attack.
Medical staff treated the victim on site before transferring him to an outside hospital where the inmate succumbed to his injuries.
The victim is identified as inmate Matthew Jagger, 33, from Contra Costa County. He was received by California Department of Corrections and Rehabilitation on February 1, 2012. He was serving a 13-year sentence for vehicle theft, carjacking, and in-prison offenses of assault by prisoner with deadly weapon and possession of deadly weapon by an inmate. The inmate’s next of kin has been notified.
No staff members were harmed in the incident.
Both inmate attackers have been transferred to HDSP’s Administrative Segregation Unit pending the investigation.
Inmate movement has been limited to facilitate the investigation.
The Office of the Inspector General has been notified.
HDSP located in Susanville houses approximately 3,660 inmates including low-, medium-, and maximum-security inmates. 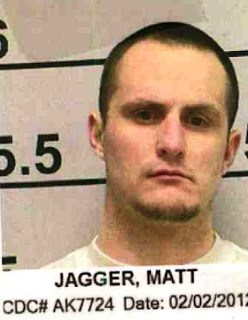