LOS ANGELES — California Department of Corrections and Rehabilitation (CDCR) officials have apprehended a state prison inmate who walked away from a Los Angeles re-entry facility on Tuesday, Sept. 1. 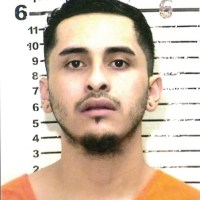 Hugo Andalon, 21, had been participating in the Male Community Reentry Program (MCRP) in Los Angeles County since July 21. Andalon was seen jumping over the fence, and an emergency count was immediately conducted. Andalon was discovered to be missing and law enforcement was notified.
CDCR’s Special Service Unit, working with local law enforcement, tracked Andalon to a shopping mall on

Sept. 2, and he was taken into custody without incident. He was transported to the California Institution for Men in Chino.

Andalon was committed to CDCR on Dec. 24, 2014, from Los Angeles County to serve a two-year sentence for inflicting corporal injury on a spouse/cohabitant and evading a police officer while driving recklessly. He was scheduled to be released to parole later this month.
The MCRP is a voluntary program for male inmates who have approximately 120 days left to serve. The MCRP allows eligible inmates committed to state prison to serve the end of their sentences in the re-entry center to transition from custody to community.
FOR IMMEDIATE RELEASE