PRINCETON COUNTY, ILLINOIS — California Department of Corrections and Rehabilitation (CDCR) officials are looking for a maximum-security state prison inmate who escaped while being transported back to Richard J. Donovan Correctional Facility (RJDCF) in San Diego from a court proceeding on a criminal matter in Tennessee.

On Wednesday evening, Sept. 2, Joshua Lee Drinnon, 35, was being transported by Inmate Services Corporation, contracted through the Sullivan County Sheriff’s Department in Tennessee.

At a rest stop on Interstate 80 about five miles outside Princeton, Illinois, Drinnon was able to get out of his restraints and run past the transporting officers. He was last seen scaling a fence and running into a cornfield.
The Princeton County Sheriff’s office is currently heading the search for Drinnon and is working with CDCR’s Office of Correctional Safety to locate and apprehend him. Search efforts include approximately 100 personnel, search dogs and air support.

Drinnon is a white male, 6’ tall and weighs 240 pounds. He has blue eyes and brown hair. He was committed to CDCR on Dec. 12, 2012, from San Luis Obispo County with a 17-year sentence for robbery, his second strike.  He was scheduled to be released to parole in May 2025. After that, he would have been transported to Tennessee to serve the six-year sentence for aggravated robbery he received while out to court.

Anyone seeing Drinnon or having any information of his whereabouts should immediately contact law enforcement or call 911. 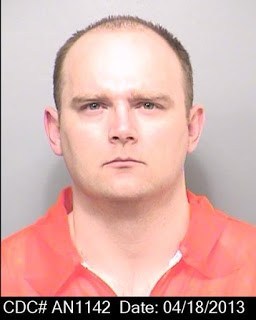