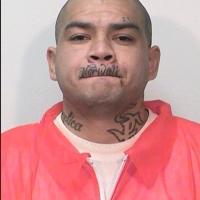 LOS ANGELES — Special agents with the California Department of Corrections and Rehabilitation’s (CDCR) Office of Correctional Safety located and arrested Joseph R. Gallegos, 29, who had walked away from a Los Angeles re- entry facility on Sept. 16.

On Saturday, Sept. 19, CDCR agents located Gallegos and his girlfriend in Los Angeles. They were arrested without incident.

Gallegos was transported to California Institution for Men in Chino. He is facing new charges of escape. His girlfriend was booked into a Los Angeles Sheriff’s Department station on an outstanding warrant.

Gallegos was transferred from Kern Valley State Prison on Sept. 16 to the Male Community Re-entry Program (MCRP) in Los Angeles County. He jumped a fence, ignored orders to stop and jumped into a waiting vehicle. He had been wearing a GPS device, but later cut it off.

Gallegos was received on Feb. 23, 2015, from Los Angeles County with a three-year sentence for evading or attempting to evade a peace officer while driving recklessly, vehicle theft with prior vehicle-related theft convictions, receiving a stolen vehicle and possession of ammunition by a prohibited person. He was scheduled to be released to parole in January 2016.

The MCRP allows eligible inmates committed to state prison to serve the end of their sentences in the re-entry center and provides a smooth transition from custody to the community. It is a voluntary program for male inmates who have approximately 120 days left to serve. The program provides rehabilitative services that assist the participants with substance use disorders, mental health care, medical care, employment, education, housing, family reunification and social support.

Of all escapes from adult institutions, camps, in-state contract beds and community-based facilities, 98.5 percent have been apprehended.