SYLMAR—The California Department of Corrections and Rehabilitation (CDCR) officials are looking for a male state prison inmate who walked away from the Holton Conservation Camp in Sylmar last night.

Jesse Diaz, 24, had been participating in the voluntary conservation camp program since January. He was last seen at approximately 11 p.m. last night during a regularly scheduled inmate count.

Diaz was committed to CDCR on March 21, 2014 from Riverside County to serve a four-year sentence for evading a peace officer while driving recklessly, his second strike. He was due for parole consideration June 29, 2016.

CDCR has sent staff and resources to locate and apprehend the inmate. The California Highway Patrol and Los Angeles Sheriff’s Office have been contacted for assistance.

Diaz is described as a Hispanic male, 5’10, 130 pounds with either black hair or shaved head. He has “56” tattooed on his neck as well as tattoos on the back of his scalp.

Anyone knowing the location of inmate Jesse J. Diaz or having other relevant information is asked to call 911 or contact the Holton Conservation Camp Commander at (818) 897-7071, or the Sierra Conservation Center Watch Commander at (209) 984-5291, extension 5439.

Originally, Holton Conservation Camp was located in Mt. Gleason until 2009 when the tragic Station Fire claimed the lives of two Los Angeles County Fire Department (LACFIRE) camp staff and destroyed the camp. Following the fire, the camp relocated to its current location in Sylmar.

Holton Camp is operated jointly by CDCR and LACFIRE. It currently houses 71 inmates, 50 of whom are Los Angeles County Jail inmates that CDCR houses for $10.00 a day. 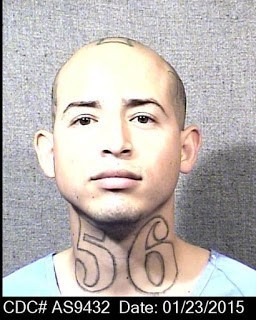