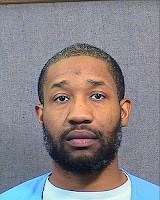 GEORGETOWN – The California Department of Corrections and Rehabilitation (CDCR) announced the apprehension of an inmate who walked away nine days ago from the Growlersburg Conservation Camp, located near the community of Georgetown, in El Dorado County.
Inmate Deandrea J. Farlow was last seen in his assigned dorm on Sunday, March 27, 2016, at approximately 8:45 p.m. during an informal camp count. At approximately 10:30 p.m. during count, staff could not locate Farlow and began escape procedures to find and apprehend him. On Tuesday, April 5, 2016, Farlow was apprehended in Las Vegas, Nevada, by CDCR’s Special Services Unit in coordination with the Federal Bureau of Investigations and Las Vegas Police/Sheriff’s Department.  Farlow will be held in a local facility pending transfer back to Sierra Conservation Center, and escape charges are being filed through the El Dorado County District Attorney’s Office.
Since 1977, 99 percent of all offenders who have left an adult institution, camp or community-based program prematurely have been apprehended.
Previous Post Walk Away from Vallecito Conservation Camp Apprehended
Next Post Inmate Death at Kern Valley State Prison Being Investigated as Homicide