Back to News Releases
In this section
WEOTT – The California Department of Corrections and Rehabilitation (CDCR) announced the apprehension of a minimum security inmate who walked away from High Rock Conservation Camp in Humboldt County on Sunday, June 12. 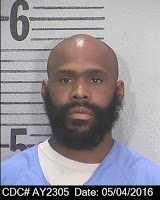 At approximately 7:35 p.m. last night, Inmate Erwin Young, 33, was apprehended by CDCR Investigative Services Unit (ISU) staff on Broadway Street in Eureka, CA.
Young was committed to CDCR on November 4, 2015 from Contra Costa County for vehicle theft.  He was scheduled to be released on February 21, 2017. He will be transported to the California Correctional Center in Susanville, and will no longer be eligible to be housed in a Conservation Camp.