MORENO VALLEY – An offender who walked away from a residential home in the Alternative Custody Program (ACP) Nov. 2 has been apprehended. 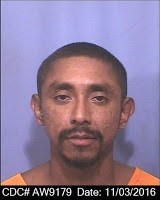 Michael Diaz, 28, was located at 3:53 p.m. Nov. 3 at a homeless encampment in Moreno Valley by agents from the California Department of Corrections and Rehabilitation (CDCR) Special Service Unit (SSU). He was taken into custody without incident and transported to California Institution for Men in Chino.
Diaz was discovered missing at approximately 12:30 p.m. Nov. 2 after he tampered with his ankle monitor. Diaz had been participating in ACP in Moreno Valley since October 2016.
ACP is a voluntary program developed for eligible offenders that allows them to serve up to the last 12 months of their sentence in the community in lieu of confinement in state prison. Eligible participants may be housed in a private residence, transitional care facility or residential drug or other treatment program.
Diaz was received by CDCR in June 2015 from Riverside County to serve a five-year sentence for possession of a controlled substance for sale, possession of a controlled substance for sale with prior felony conviction, and possession or ownership of a firearm by a felon or addict. He was scheduled to be released to probation in December 2016.
Since 1977, 99 percent of all offenders who have left an adult institution, camp or community-based program without permission have been apprehended.
Previous Post CDCR Checks on Approximately 1,200 Sex Offenders During 23rd Annual Operation Boo
Next Post CDCR Apprehends Offender Who Walked Away from Residential Treatment Facility