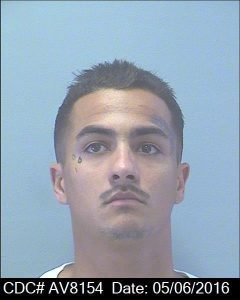 SOLEDAD — A minimum-security inmate who walked away from the minimum-support facility at Salinas Valley State Prison (SVSP) April 9 has been apprehended.

Minimum-security inmate Brian Martin, 22, was apprehended at approximately 11:30 a.m. Monday, April 10, in Gonzales by officers from the Gonzales Police Department. He was taken into custody without incident and returned to SVSP.

Martin was committed to CDCR on Feb. 5, 2015, from Butte County to serve a six-year sentence for burglary and receiving stolen property.

SVSP opened in May 1996 on approximately 300 acres in Monterey County. The institution provides long-term housing for approximately 3,700 minimum- and maximum-custody male inmates and employs 1,395 people.