CAMARILLO CA – California Department of Corrections and Rehabilitation (CDCR) officials announced today that inmate Johnny Macias was taken back into custody without incident on the afternoon of Tuesday, Sept. 26 during a traffic stop in San Diego County. He has been transported to the R.J. Donovan Correctional Facility. 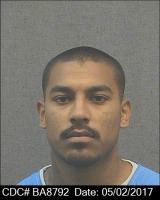 Macias, 20, was discovered missing by Ventura Conservation Camp staff at approximately 10:10 pm on Sunday, Sept 24.  He was received by CDCR in Sept. 2016 with a three-year sentence from Orange County for carjacking.  His case will be forwarded to the Ventura County District Attorney’s office for prosecution on escape charges.