VALYERMO – California Department of Corrections and Rehabilitation (CDCR) officials are looking for a minimum-security inmate who walked away from the Fenner Canyon Conservation Camp, located near the community of Valyermo in Los Angeles County.

At 4:20 a.m. staff discovered inmate Jon Nicholas missing during a routine security check. Officers began an immediate search of the camp. CDCR’s Office of Correctional Safety, CAL FIRE, the California Highway Patrol and local law enforcement have been notified and are assisting in the search.

Nicholas, 37, is a white male, five-feet, nine-inches tall, weighing 161 pounds, with brown hair and blue eyes. He was received by CDCR in August 2018 from Los Angeles County to serve a five-year, four-month sentence for assault with a deadly weapon and grand theft auto.

Anyone who sees Nicholas should contact 911 or law enforcement authorities immediately. 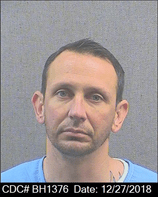