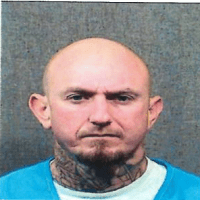 CAMARILLO—-California Department of Corrections and Rehabilitation (CDCR) officials are looking for a minimum-security inmate who walked away from the Ventura Conservation Camp, near the community of Camarillo in Ventura County.

Inmate Bobby Gleason, 37, was discovered missing by camp staff at approximately 11:30 pm on April 6.  Camp staff searched the inmate dormitory area, surrounding buildings and the camp perimeter after he was discovered missing.  All local law enforcement agencies have been notified and are assisting in the search for Gleason.

Gleason was last seen wearing grey sweats/shorts and a white T-shirt and is described as a white male, 5’ 10”, 160 pounds, shaved head (black/brown hair), blue eyes and was last seen with a mustache and goatee.  Gleason has multiple tattoos on his neck, hands, arms, legs and torso.

Gleason was committed to CDCR from San Diego County as a second-striker for burglary and was serving a sentence of nine years.  He was scheduled to be released in August, 2019.

Of all offenders who have walked away from an adult institution, camp or community-based program since 1977, 98.7 percent have been apprehended.