You are currently using an unsupported browser. We recommend you change your browser to Chrome, Firefox, Safari, or Edge for the best and most secure experience.
Back to News Releases
In this section
CRESCENT CITY – California Department of Corrections and Rehabilitation (CDCR) officials are looking for a minimum-security state prison inmate who walked away from Alder Conservation Camp (CC #20) on April 11, 2016. 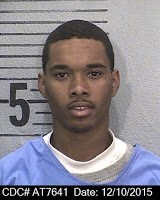 Inmate Darius Louis, 19, was assigned to an inmate firefighting crew at CC #20 in Crescent City. He was last seen at CC #20 by camp staff at 9 p.m. April 11 during a routine count. He was later discovered missing by staff on April 11 during the 10:30 p.m. count.
Louis is a black male, 5’ 7” tall, 146 pounds, with brown eyes and brown hair. He was committed to CDCR on June 4, 2015, from Lake County for grand theft. He was scheduled to be released from CDCR custody on March 9, 2020.
CDCR, CAL FIRE, law enforcement personnel, local law enforcement agencies and the California Highway Patrol were notified and are assisting in the search for Louis. All responding law enforcement agencies are continuing with the search and apprehension efforts at this time.
Anyone seeing Louis should call 9-1-1 or law enforcement authorities immediately. Anyone having information about or knowledge of the location of Louis should contact the CCC Watch Commander at (530) 257-2181, extension 4173.
Alder Conservation Camp (CC#20) houses approximately 100 minimum-custody inmates.