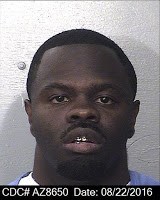 VACAVILLE – Today, the California Department of Corrections and Rehabilitation (CDCR) announced the apprehension of an inmate who earlier this week had walked away from a minimum-support facility at the California Medical Facility (CMF).

This morning, at approximately 5:30 a.m., inmate Jarvis Brown was apprehended without incident at a residence in the city of Richmond by the CDCR Office of Correctional Safety (OCS).  Brown will be held in a local correctional facility pending transfer back to CMF. Brown was reported missing during an institutional count at approximately 12:30 a.m. on Monday, Oct. 17. He had been last seen on his bunk at around 11:30 p.m. Notification was immediately made to local law enforcement agencies, surrounding community and the media.

Brown was received by CDCR in May 2016 from Contra Costa County to serve a three-year sentence for evading a peace officer while driving recklessly. He was scheduled to be released in March 2017.