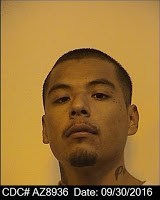 TRACY — California Department of Corrections and Rehabilitation (CDCR) officials announced today that Gilberto Murillo-Padilla, 22, was taken back into custody Sunday afternoon, Nov. 27, less than three hours after he was reported missing from his dorm at Deuel Vocational Institution (DVI).

Murillo-Padilla was discovered missing during an inmate count at DVI’s Minimum Support Facility at 11:15 a.m. Nov. 27. Escape protocols were immediately initiated, and agents from CDCR’s Office of Correctional Safety (OCS) were dispatched to locate and apprehend Murillo-Padilla.
He was apprehended at 2:05 p.m. Nov. 27, about three miles from DVI by the prison’s Investigative Services Unit and San Joaquin County Sheriff’s Office. He was taken into custody without incident and has been placed in the prison’s Administrative Segregation Unit pending investigation of the incident.
Murillo-Padilla was received by CDCR on May 13, 2016, from Solano County to serve a two-year, eight-month sentence for first-degree burglary and evading a peace officer while driving recklessly. He was scheduled to parole in December 2016; however, his case will now be referred to the San Joaquin County District Attorney’s Office for possible prosecution on escape charges.
Since 1977, 99 percent of all offenders who have left an adult institution, camp or community-based program without permission have been apprehended.
CONTACT: Lt. Mark Jackson
(209) 835-4141 ext. 3851
Previous Post CDCR Apprehends Offender Who Walked Away from Residential Treatment Facility
Next Post Inmate Death at Valley State Prison Being Investigated As A Possible Homicide