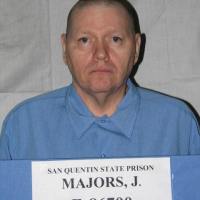 SAN QUENTIN —Condemned inmate James David Majors, 69, from Sacramento County, was pronounced dead at about 7:30 a.m. Thursday morning at a nearby hospital. The cause of death is unknown pending the results of an autopsy. Majors had been on death row at San Quentin State Prison since February 1991.
Majors was sentenced to death by a Sacramento County jury for the Jan. 25, 1989, robbery and first-degree murders of Thomas Probst, Jeanine Copeland and Patrick Mungavin at a Fair Oaks residence. Majors and his accomplice, Robert Reese, traveled to Sacramento from Arizona for the purpose of buying a pound of methamphetamine.  Both assailants shot and killed the three adult occupants and, upon leaving the residence, took contents from a safe that included methamphetamine, money and jewelry. The victims were discovered by Copeland’s 8-year-old son. Reese was found shot to death in Arizona a month after the murders.
Since 1978, when California reinstated capital punishment, 71 condemned inmates have died from natural causes, 25 have committed suicide, 13 have been executed in California, one was executed in Missouri, one was executed in Virginia, eight have died from other causes, and two (including Majors) have their cause of death pending. There are currently 749 offenders on California’s death row.
FOR IMMEDIATE RELEASE