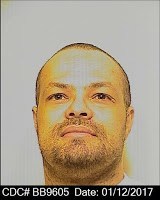 Houston was sent out to court in Sacramento County from CDCR to face charges of vehicle theft and receiving stolen property last month. He had been housed at Sacramento County Jail while in the custody of local authorities.

CDCR had an active detainer on Houston, so that he would be returned to CDCR custody after the court proceedings. Instead, on June 13 after Houston’s court case was dismissed, he was mistakenly released by the Sacramento County Sheriff’s Office. Agents from CDCR’s Special Services Unit and SCSO’s Major Crimes Unit were immediately dispatched to locate and apprehend Houston.

Houston was received by CDCR from Yolo County on Jan. 12, 2017, to serve a 35-year sentence for vehicle theft, evading a peace officer while driving recklessly, hit-and-run causing injury to another person, and assault with a deadly weapon. Until his transfer to Sacramento County Jail, Houston was housed at Deuel Vocational Institution in Tracy.

Houston is an African American man with brown hair and hazel eyes. He is 5 feet, 11 inches tall and weighs 262 pounds. Anybody who sees Houston or has any knowledge of his whereabouts should immediately call 911.