SAN QUENTIN — Condemned inmate Christopher Adam Geier, 49, who was on California’s death row from San Bernardino County, was pronounced dead on August 30, 2017, at 11:34 a.m. at San Quentin State Prison. He was out on the recreation yard when he collapsed at 10:46 a.m. Wednesday morning. Lifesaving measures were initiated, but Geier passed away. The cause of death is unknown pending the results of an autopsy.

Geier was sentenced to death by a San Bernardino County jury, on July 21, 1995, for two counts of first degree murder and conspiracy to commit first degree murder. He was convicted for the rape and murder of Military Police Officer Erin Tynan, and the murder for financial gain of Curtis James Dean, who was stabbed and bludgeoned to death in front of his young children. Geier was also convicted for the conspiracy to murder Gail LeBouef, who survived being shot in the face.

Geier had been on California’s death row since October 20, 1995. 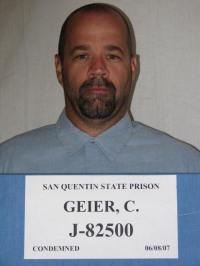