SACRAMENTO – The California Department of Corrections and Rehabilitation (CDCR) published two annual recidivism reports today. The 2016 Outcome Evaluation Report examined the recidivism of people released from state prison between July 1, 2011, and June 30, 2012, and the 2017 Outcome Evaluation Report studied recidivism of people released in fiscal year 2012-2013. Starting with the 2016 report, CDCR is transitioning its primary measure of recidivism from the three-year return-to-prison rate to the three-year conviction rate. This change is consistent with the statewide definition of recidivism and provides a more meaningful measure of reoffending behavior for CDCR offenders.

For 40 years, CDCR has studied recidivism by tracking arrests, convictions and returns to prison and used the three-year return-to-prison rate as its primary measure. Following the implementation of Assembly Bill 109, California’s Public Safety Realignment Act, a law passed by the Legislature in 2011, there are fewer offenders who are eligible to return to state prison for parole violations and most offenders convicted of non-violent, non-serious, non-registrable sex-offense felonies serve their sentences in county jail. As a result, the three-year return-to-prison rate for fiscal year 2011-2012 is 25 percent; in fiscal year 2012-2013, it is 22.2 percent, substantially less than 67.5 percent in fiscal year 2005-2006 during the height of prison overcrowding.

Assembly Bill 1050, enacted in September 2013, required the Board of State and Community Corrections to develop definitions of key criminal justice terms including “recidivism” in order to facilitate consistency in local data collection, evaluation and implementation of evidence-based programs. The definition allows for supplemental measures of recidivism, including arrests, returns to custody, and supervision violations. 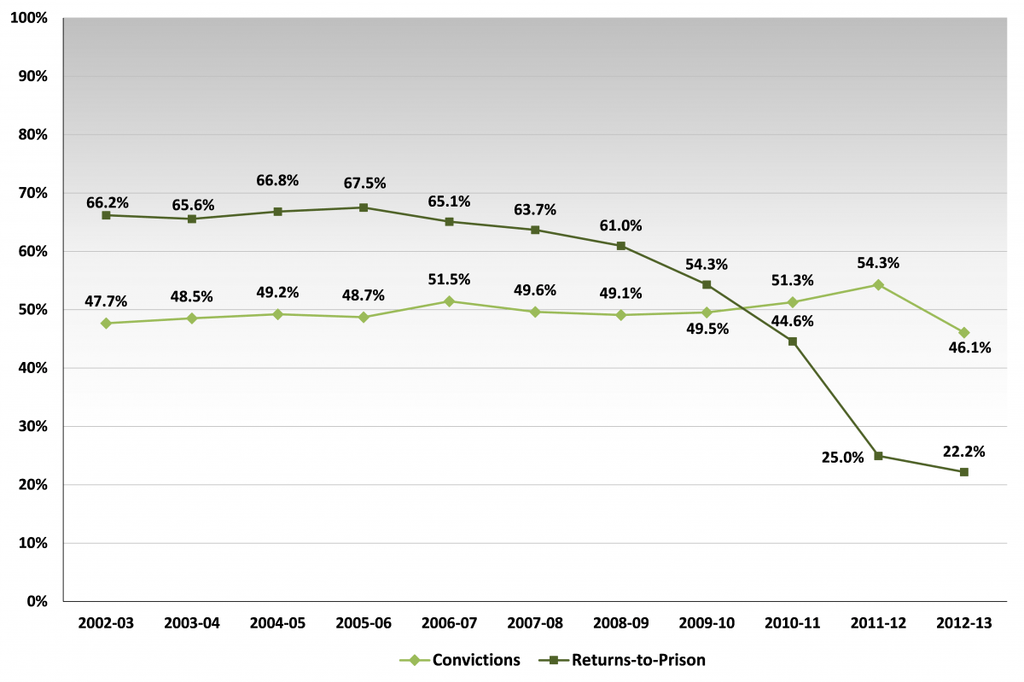 Overall, across the past 11 release cohorts, the three-year conviction rate has been generally stable.

Among the reports’ findings: