REDDING – California Department of Corrections and Rehabilitation (CDCR) officials are searching for a minimum-security inmate who walked away from the Sugar Pine Conservation Camp in Shasta County on Oct. 19, 2017.

At around 1:50 p.m. a CAL FIRE captain driving toward camp reported what he believed to be an inmate in grey sweatshirt and a white hat squatting on the side of Sugar Pine Camp Road two to three miles from Highway 299. Sugar Pine staff initiated an emergency count of inmates and discovered Inmate Anthony Jimenez, 28, was unaccounted for.

Jimenez was assigned as a firefighter at the camp, which houses approximately 120 minimum-custody inmates.

CDCR Office of Correctional Safety, CAL FIRE, law enforcement personnel, the California Highway Patrol and local law enforcement agencies have been notified and are assisting in the search for Jimenez.

Jimenez is a Hispanic male, 5 feet 7 inches tall, weighing 188 pounds with brown eyes, shaved head, a mustache and goatee. He was committed to CDCR on Oct. 3, 2016, from Los Angeles County to serve a three-year, eight-month term for evading a peace officer while driving recklessly and vehicle theft. He was scheduled be released to probation in December 2017. 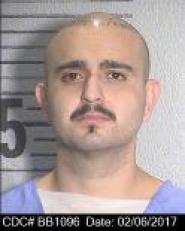