TUCSCON, ARIZONA – A minimum-security inmate who walked away from the minimum-support facility at Deuel Vocational Institution (DVI) in Tracy Oct. 1, 2017, was apprehended Oct. 19 in Tucson, Arizona.

Inmate Bobby D. John, 40, had last been seen at his job assignment at the California Prison Industry Authority Dairy at DVI on Sunday, Oct. 1. The California Department of Corrections and Rehabilitation’s Office of Correctional Safety (OCS) was immediately dispatched, along with state and local law enforcement, to locate and apprehend John.

Based on the facts of the investigation, intelligence was gathered that John may have been in Tucson, Arizona. Contact was made with the U.S. Marshal Service (USMS) there through an OCS/USMS task force member. The USMS apprehended John at about 4:30 p.m. Thursday, Oct. 19, at a motel in Tucson. He was taken into custody without incident and is being held at the Pima County Jail while awaiting extradition back to California.

John was received by CDCR from Sacramento County in May 2014 with a six-year sentence for first-degree burglary. He was scheduled to be released in November 2020. His case will now be forwarded to the San Joaquin County District Attorney’s Office for prosecution on escape charges, and he will not be eligible to be housed in a minimum-support facility again. 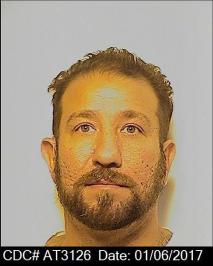