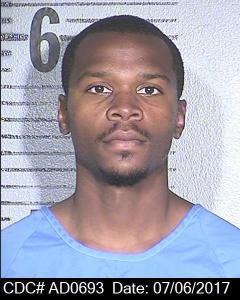 SUISUN CITY – California Department of Corrections and Rehabilitation (CDCR) officials are searching for a minimum-security inmate who walked away from the California Correctional Center (CCC) Delta Conservation Camp (CC #08) in Solano County on Nov. 18.

During an inmate count at around 11:15 p.m., staff discovered inmate Rashad Vaca, 27, was not in his assigned bunk. A search of the camp buildings and grounds was immediately conducted. Vaca was last seen during 9 p.m. count. CDCR’s Office of Correctional Safety, CAL FIRE, the California Highway Patrol and local law enforcement agencies have been notified and are assisting in the search.

Vaca was assigned as a firefighter at Sugar Pine Conservation Camp in Bella Vista, and had been at Delta CC as part of the strike team assisting in the Napa County disaster recovery efforts Delta CC houses approximately 120 minimum-custody inmates.

Vaca is a black male, 6 feet tall, weighing 191 pounds with brown eyes, black hair, a mustache and goatee. He was committed to CDCR on Aug. 10, 2010, from Solano County to serve a 12-year sentence for second-degree robbery with a firearm. He was scheduled to parole in January 2020.