ENCINITAS– An inmate who escaped from the California Institution for Men (CIM) in Chino Jan. 14 has been apprehended.

Michael Garrett, 33, was taken into custody without incident at 6:05 p.m. Monday, Jan. 15, by the San Diego Sheriff’s Office-Encinitas.

Following investigative leads, special agents from the California Department of Corrections and Rehabilitation (CDCR) Office of Correctional Safety (OCS) Special Service Unit and Fugitive Apprehension Team tracked Garrett to a Vons grocery store at 453 Santa Fe Drive. The San Diego Sheriff’s Office responded to the location, where they observed Garrett standing in front of the store. He was taken into custody without incident and will be transported back to CIM.

At around 9:15 p.m., Sunday, Jan. 14, it was discovered that Garrett was not accounted for during the evening inmate count. An emergency search was immediately conducted, and Garrett was not found. Escape procedures were immediately activated, to include notification of local law enforcement and the activation of OCS special agents to locate and apprehend Garrett.

Garrett was received by CDCR on Oct. 30, 2017, from San Diego County to serve a four-year, eight-month sentence for first-degree burglary, evading or attempting to evade a peace officer while driving recklessly, and vehicle theft. He was scheduled to parole in October 2019. His case will now be forwarded to the District Attorney’s Office for consideration of escape charges.

The OCS mission is to protect the public and serve CDCR investigative and security interests. OCS is the primary departmental link with allied law enforcement agencies and the Governor’s Office of Emergency Services.

CIM, which opened in 1941, houses approximately 3,400 minimum- and medium-security inmates. As part of its mission, CIM operates a Reception Center that provides short-term housing necessary to process, classify and evaluate new inmates physically and mentally, and determine their security level, program requirements and appropriate institutional placement. 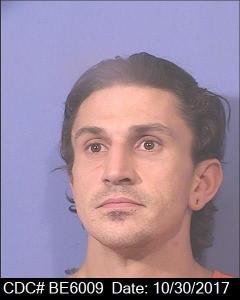