JAMESTOWN – An inmate firefighter died Saturday, April 21, at Sierra Conservation Center (SCC). The cause of his death is unknown and foul play is not suspected.

Despite the efforts of staff, inmate firefighters and outside emergency responders, Colacino was pronounced dead at 8:41 a.m. at SCC. His next-of-kin were notified, as were the Tuolumne County Coroner and the Office of the Inspector General.

Colacino was received into California Department of Corrections and Rehabilitation (CDCR) custody on Feb. 26, 2017, from Riverside County to serve four years, four months for two counts of evading a peace officer while driving recklessly, cruelty to animals, and discharging a firearm with gross negligence. He had been expected to parole in July 2019. He had been at SCC since June 2017, and April 21 was his first day as an inmate firefighter.

SCC opened in 1965 and houses approximately 4,200 inmates. SCC is one of only two prisons in the state responsible for the training and placement of male inmates in the Conservation Camp Program. SCC administers 20 male camps located from Central California to the Southern California border. Approximately 3,500 inmates, all volunteers, are housed in 43 conservation camps operated by CDCR, in conjunction with CAL FIRE and the Los Angeles County Fire Department. The conservation camp program mission is to provide critical fire suppression services while also working alongside first responders during other community emergency disaster events such as earthquakes and floods. 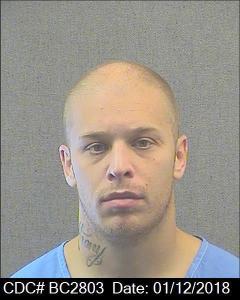