VALLECITO, CA – California Department of Corrections and Rehabilitation (CDCR) officials are looking for a minimum-security inmate who walked away from the Vallecito Conservation Camp, located near the community of Vallecito, in Calaveras County.

Inmate Ernest Anthony Morales, 26, was last seen in his assigned dorm on Saturday, June 9 at approximately 12:25 a.m. during a routine security check. Camp staff searched the inmate dormitory area, surrounding buildings and the camp perimeter after he was discovered missing. The CDCR Office of Correctional Safety (OCS), all local law enforcement agencies, and the California Highway Patrol have been notified and are assisting in the search for Morales.  Apprehension efforts are continuing.

Morales is described as a Hispanic male, 5’10”, 259 pounds, with short dark brown hair, tattoos on his face, and brown eyes. He was received by CDCR in June 2017 with a four year sentence, for vehicle theft as a second striker out of Fresno County.

Since 1977, ninety-nine percent of all offenders who have left an adult institution, camp, or community-based program without permission have been apprehended. 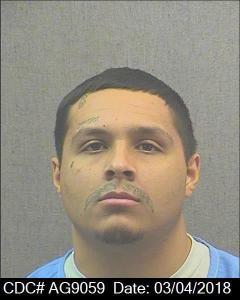