NEVADA CITY – California Department of Corrections and Rehabilitation (CDCR) officials are searching for a minimum-security inmate who walked away from the California Correctional Center (CCC) Washington Ridge Conservation Camp in Nevada County on September 18, 2018.

Inmate Justin Tyquiengco was discovered missing at approximately 5:30 a.m. when staff was conducting count. He was last seen at the 3:30 a.m. count.

CDCR’s Office of Correctional Safety, CAL FIRE, law enforcement personnel, the California Highway Patrol and local law enforcement agencies have been notified and are assisting in the search for Tyquiengco.

Tyquiengco, 22, is approximately 5’ 10” tall, weighs 174 pounds, and has brown eyes and black hair. He was received by CDCR in September 2015, from Contra Costa County with a six-year sentence for second-degree robbery with the use of a firearm. He received an additional commitment in Alameda County to serve one year consecutive with his primary sentence for second degree robbery. 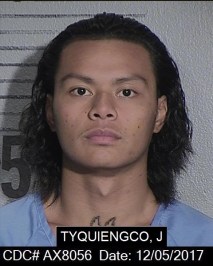