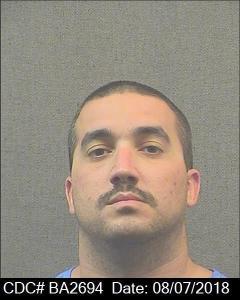 During an inmate count at around 9 p.m., staff discovered inmate Jack Wyatt, 29, was not in his assigned bunk. A search of the camp buildings and grounds was immediately conducted. Wyatt was last seen during 7:30 p.m. count. CDCR’s Office of Correctional Safety, CAL FIRE, the California Highway Patrol and local law enforcement agencies have been notified and are assisting in the search.

Wyatt is a Hispanic male, 5 feet, 9 inches feet tall, weighing 225 pounds with brown eyes, brown hair, a mustache. He was committed to CDCR on June 23, 2016, from Los Angeles County to serve a five-year sentence for second-degree robbery with a firearm. He was scheduled to parole in April 2019.