IONE — California Department of Corrections and Rehabilitation (CDCR) officials are looking for a state prison inmate who walked away from the minimum-support facility at Mule Creek State Prison on February 7, 2019.

Lee, 34, is a white male, 5 feet, 9 inches tall, and weighs 210 pounds. He has tattoos on his head and neck areas. He was received by CDCR in June 2017 out of Sacramento County with a three-year sentence for first-degree robbery.

Anyone who sees Lee, or has any knowledge of his whereabouts, should immediately contact law enforcement or call 911.

MCSP, which opened in 1987, houses more than 3,900 minimum-, medium- and maximum-security inmates. The prison, located in Amador County, provides educational, medical and mental health services and employs more than 1,400 people. 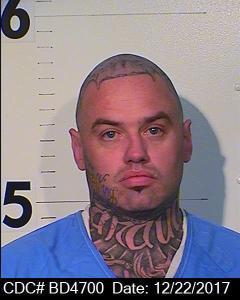