SAN QUENTIN – Condemned inmate Jesse Manzo, 27, attacked a correctional officer at San Quentin State Prison Thursday evening as he was being returned from the shower to his cell.

Investigators at San Quentin have launched a probe into the attack that occurred just after 5 p.m. as the officer was escorting the inmate from the shower in the prison’s East Block Housing Unit. Manzo slipped out of an open handcuff and used it to strike the officer several times.

The officer suffered cuts and wounds and a significant facial injury. The officer was taken to an outside hospital for treatment and is expected to make a full recovery.

The East Block Housing Unit is one of five units in the prison where male inmates on California’s Death Row are housed.

Manzo, a self-admitted gang member, was sentenced to death in Riverside County on Aug. 2, 2013. He was convicted of first-degree murder in the 2008 gang-related hate crime killing of Raymond Franklin. Manzo has been on California’s Death Row since Aug. 12, 2013.

As of May 12, there are 747 inmates on Death Row in California. San Quentin, opened in 1852, is California’s oldest correctional institution. The prison houses 4,056 inmates and employs 1,644 people. 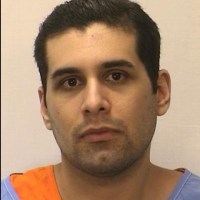