SAN QUENTIN — Condemned inmate Fernando Belmontes, 56, who was on California’s death row from San Joaquin County, was pronounced dead on Friday, Sept. 29, 2017, at 3:18 p.m., at a nearby hospital.  The cause of death is unknown pending the results of an autopsy.

Belmontes was sentenced to death by a San Joaquin County jury on Oct. 6, 1982, for first-degree murder during a burglary of the home of 19-year-old Steacy McConnell. While living in a halfway house in Stockton, Belmontes and two co-defendants decided to rob the home of an acquaintance in Victor, east of Lodi, hoping to steal her stereo while she was out. Belmontes had miscalculated and McConnell was home. In an effort to do away with the only witness to his crime, Belmontes pounded her head 15 to 20 times with an iron dumbbell, crushing her skull. McConnell’s parents arrived home later to find their daughter dead on the floor in a pool of blood. Meanwhile, Belmontes and two co-defendants had sold McConnell’s stolen stereo for $100 and bought some beer.

Belmontes had been on California’s death row since Oct. 6, 1982. 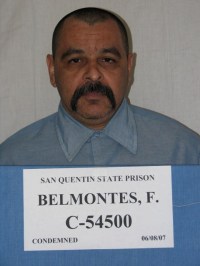