At approximately 4:50 p.m., inmate David Carter, 27, was taken into custody after he was sighted by a motorist on Highway 101 approximately two miles south of Redcrest. CCC Crisis Response Team members took Carter into custody without incident.

Carter will be transported to CCC in Susanville, and will no longer be eligible to be housed in a Conservation Camp.

Carter was committed to CDCR on May 16, 2014, from Los Angeles County to serve a nine-year term for criminal threats to cause great bodily injury or death. He was scheduled to parole in November 2018. 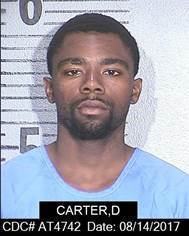