MISSION HILLS — A minimum-security inmate who walked away while fighting the Canyon 2 Fire in Orange County on Oct. 15 was apprehended late last night in the San Fernando Valley.

Inmate Armando Castillo, 31, was part of the inmate crews fighting the fire near Peters Canyon Regional Park. He was last seen at 4:45 p.m. Oct. 15, before crews returned to Prado Conservation Camp in San Bernardino County.

Following investigative leads, the California Department of Corrections and Rehabilitation (CDCR) Special Service Unit, working with the Los Angeles Fugitive Apprehension Team, tracked Castillo to a motel in Mission Hills. He was taken into custody without incident at about 11:40 p.m. Tuesday, Oct. 31, and transported to the California Institution for Men in Chino.

Daisy Castro, who was with Castillo at the motel, was detained on suspicion of assisting Castillo throughout his escape and was released. Both cases will be forwarded to the District Attorney’s Office for prosecution, and Castillo will not be eligible to be housed in a fire camp.

Castillo was committed to CDCR on Aug. 23, 2016, from Los Angeles County to serve a five-year sentence for possession of a firearm and evading a peace officer while driving recklessly. He was scheduled to be released to probation in May 2018. 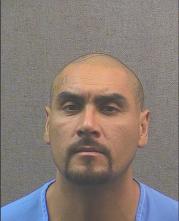