MOUNTAIN VIEW — A minimum-security inmate who walked away from the Minimum Support Facility (MSF) at California State Prison-Los Angeles County (LAC) on Oct. 28 has been apprehended and returned to state prison.

Jason Kohr, 36, was arrested at 11:35 p.m. Sunday, Nov. 5, in Mountain View by agents from the California Department of Corrections and Rehabilitation (CDCR) Special Service Unit (SSU). Following investigative leads, special agents from SSU Bay Area and Bay Area Fugitive Apprehension Team observed Kohr in a stolen vehicle. When agents approached Kohr he attempted to flee on foot, but agents quickly caught up to him after a short foot pursuit. He continued to struggle, and agents used a Taser to gain compliance. Kohr was subdued and arrested. No staff members were injured.

Kohr was taken into custody and returned to state prison. Mountain View Police Department recovered the vehicle and will press charges for a stolen vehicle. Kohr’s case will be referred to the District Attorney’s Office for prosecution on escape charges.

Kohr was discovered missing during an institutional count at 9 p.m. Oct. 28. He was last seen during 4 p.m. count and at the evening meal. Staff immediately began searching the surrounding areas. Notification was made to local law enforcement agencies and agents from CDCR’s Office of Correctional Safety (OCS) were immediately deployed to locate and apprehend Kohr.

He was received by CDCR from Ventura County in May 2016 with a six-year term for vehicle theft, attempting to evade a peace officer while driving recklessly, and second-degree burglary. He was scheduled to be released in July 2018.

The OCS mission is to protect the public and serve the CDCR investigative and security interests. OCS is the primary departmental link with allied law enforcement agencies and the Governor’s Office of Emergency Services. 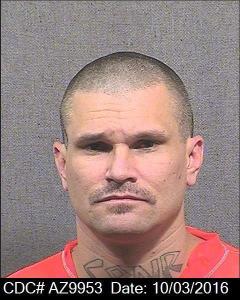