DELANO – California Department of Corrections and Rehabilitation (CDCR) officials are looking for a minimum-security inmate who walked away from the Minimum-Support Facility at North Kern State Prison (NKSP).

Inmate Daniel Lucas Salazar, 30, was discovered missing by custody staff on November 3, 2017, at approximately 9:10 p.m. during an institutional count. Escape procedures were immediately activated, and notification was made to Kern County law enforcement agencies. In addition, agents from CDCR’s Office of Correctional Safety were immediately deployed to locate and apprehend Salazar. Surrounding residents have also been notified.

Inmate Salazar was received by CDCR in August 2016 from Tuolumne County to serve a three-year, 8-month sentence for second degree robbery and use of another’s identification to obtain personal information. Salazar is described as a Hispanic male with short black hair, hazel eyes and weighing approximately 185 pounds.

Anyone with information on Salazar’s whereabouts or who sees him is urged to notify local authorities or call 911. 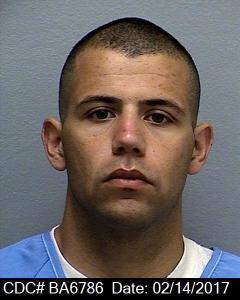